Let’s say you were going to field a basketball team. Now admittedly, I’m not a huge sports fan (basketball is the round orange ball, not the smaller pointy one, right?). But I do know enough to understand that different positions usually require different skill sets. For example, since rebounding is important for a team’s success, one would probably put the tallest players closest to the hoop. And the most agile ball handlers – who are often smaller and quicker – would be given the job of bringing the ball up court. Makes sense, right?

I think this is a good metaphor for how most work teams are constructed as well. After identifying the specific tasks that need to be completed, you find people best suited to perform those tasks.

Of course, teams differ in their missions and ways of operating. A team of engineers designing a jet engine will operate differently from a team of HR professionals trying to figure how to best recruit and retain employees. On both of these teams – because of the mission and skills required – you would also find a preponderance of some types and a dearth of others. But the most successful teams are those which can capitalize on the diverse talents of their members.

Several years ago, I consulted with a finance team for a large insurance company. The nine-member team was made up of accomplished people who had successfully climbed the corporate ladder. What became immediately apparent was that eight were Thinking types, and only one was a Feeling type. And seven team members were Sensors, and only two were Intuitives. Not surprisingly, there was only one Intuitive-Feeling type – and she happened to be the only woman on the team.

In my experience, the best decisions result when all four of the Type function “bases” are covered – which often begins by asking the right questions.

Sensors want to know: What is the specific problem we’re trying to solve, and what are our concrete objectives?...what resources do we have?...what’s been done in the past that we can use, or build on?...what exactly is the deliverable, and when it is due?

Intuitives ask: Is there a new and better way of solving this problem?...what strategic advantages can we gain?...what’s the broader context – how does what we do now impact the future?

Thinkers will want to analyze all options logically, dispassionately weighing the pros and cons, and will want to know: Are current decisions and plans consistent with previous ones?

And Feelers will be concerned with: How will our decisions affect others – our customers, employees, colleagues?...is what we’re considering consistent with our mission?...does it reflect who we are, or who we represent ourselves to be?...does it make a positive impact?

Back to the insurance company consulting gig. All nine members of the team were certainly competent in their field. But who would you consider to be the most valuable member of the team? In my judgment, it was the Intuitive Feeling woman. Why? Because she brought a perspective that the others did not have – one that was desperately needed in order to best achieve the team’s goals.

Using your gifts to make yourself indispensable

I guess “indispensable” may be a little hyperbolic. Because it could be argued that no one is truly indispensable, let’s modify that to read: “most valuable.”

If Carl Jung was the father of personality type, then Isabel Myers was surely its mother. The way I like to think of it is that Jung created this very rich model – which like Jung himself was brilliant, but quite complex. In developing the Myers-Briggs personality system along with her mother Katharine Briggs, Isabel made Jung’s work accessible to the rest of us mere mortals.

Isabel introduced the world to “Type” through her extraordinary book Gifts Differing. The title eloquently captures the value of understanding Type: each of us have different natural, inborn strengths that make us unique and valuable. And our greatest success and fulfillment comes when we’re able to identify and use these “type-related” gifts.

One of the many aspects of the personality type model that makes it so valuable, and which accounts for its enormous popularity and longevity, is that it identifies a hierarchy of preferences for each of the sixteen types: which functions – Sensing, Intuition, Thinking and Feeling are strongest, and which are weakest.

Understanding the hierarchy can be a little confusing. For those of you who want to dive deep into the theory (and you know who you are!), you may want to check out Chapter 5 in Do What You Are. For the rest of you, I offer a simpler explanation in Chapter 2 of The Art of SpeedReading People.

I use the terms “Lead,” “Second,” “Third,” and “Least” to describe the type hierarchy. For purposes of this discussion, what’s most important to focus on are the “Lead” and “Second” because they represent each type’s greatest natural strengths. But it’s equally important to understand and pay attention to your “Least” for it represents your greatest potential blind spots (more on this later).

Picture a family of four taking a car trip. In the front seat are two adults, and in the back, two children – one ten years old, the other only three. Think of the Lead as the adult driving, and the Second as the other adult helping to navigate. Think of the ten-year old as the Third, and the three-year old as the Least. Clearly, you want the Lead to be in charge (somebody has to drive!) and the Second to help out. But you still must pay attention to the kids (the Third and Least) in the back seat – to break up fights, negotiate bathroom stops, etc. We all operate at our best when using our Lead and Second Function. I think of these as our greatest gifts. Here’s a simple chart to help you identify your hierarchy. 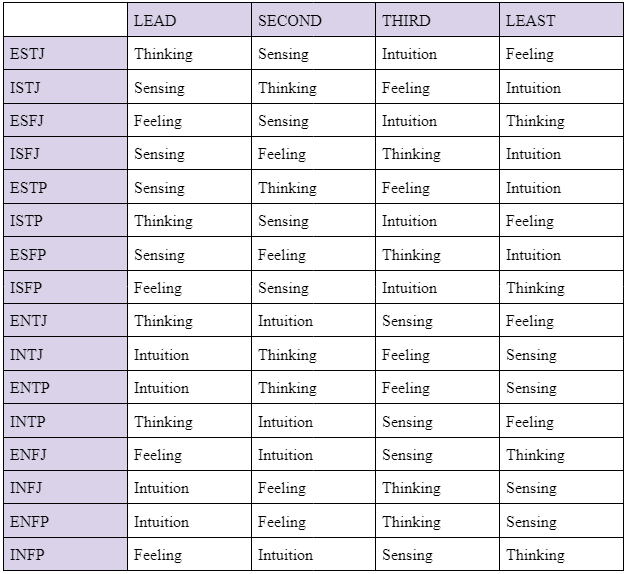 If your Lead is Sensing – as it is for ISTJs, ISFJs, ESTPs and ESFPs – you are good at clarifying the problem, gathering relevant facts and details, and assessing things realistically. You can be counted on to provide accurate information.

If your Lead is Intuition – as it is for INTJs, INFJs, ENTPs and ENFPs – you excel at generating alternatives, thinking outside the box, and anticipating how present actions may impact future circumstances.

If your Lead is Thinking – as it is for ESTJs, ISTPs, ENTJs and INTPs – you’re good at analyzing things objectively, dispassionately weighing pros and cons, and can often make the tough decisions others shy away from.

And if your Lead is Feeling – as it is for ESFJs, ISFPs, ENFJs, and INFPs, you are especially good at anticipating the effects of decisions on others, facilitating collaboration, and making sure actions are consistent with the group’s mission.

A few words about those pesky blind spots

I believe that one of the most valuable things that type has to teach us is to identify our blind spots….and learn strategies for blunting their effects. Blind spots are funny things: while we all have them, most of us are reluctant to own ours. The effect? They continue to bite us in the you-know-what.

But there is an opportunity for growth if we’re able to remove our ego from the picture and take an honest inventory of both what we do well… and not so well. One way type is helpful is it lets us understand that our Least is the opposite of our Lead. For example, Lead Thinkers may be great at logical analysis, but because their Least is Feeling, they are often uncomfortable dealing with their own or others’ emotions. Conversely, because Lead Feelers crave harmony, they are usually good at getting along with people and making them feel comfortable. But because their Least is Thinking, they tend to take things personally and can easily get their feelings hurt.

The good news is that type is not destiny! Once our consciousness has been raised, we can develop strategies to reduce the effects of our blind spots. In the example above with Thinkers, they can realize that even though they don’t see the logic in another person’s point, it’s helpful for them to respect the depth of the person’s feelings. And once Feelers understand that a critique is not the same as a criticism, they may be less likely to misinterpret the intention behind a person’s potentially hurtful comment, and not be offended. Especially, when it comes to relationships, it’s helpful to keep in mind the wisdom of author and psychotherapist Virginia Satir: “In our sameness we connect, in our differences we grow.”

Paul D. Tieger is the Founder and CEO of SpeedReading People, LLC. He is an internationally recognized expert on – and author of five breakthrough books about – personality type including The Art of SpeedReading People and the one-million copy best-seller Do What You Are.
A jury consultant for twenty-five years, Paul pioneered the use of Personality Type to help trial attorneys understand and communicate with jurors and has worked on dozens of high profile civil and criminal cases including the first physician-assisted suicide trial of Dr. Jack Kevorkian. Paul holds a BS degree in Psychology and an MS in Organizational Behavior.