How to Prioritize Your Peace During the Holiday Season, by Enneagram Type

How to Be More Authentically you as an Enneagram 3

What is Elon Musk’s DISC personality type?
View all articles

Take our free test to reveal your decision-making style and learn how you pursue goals.

Designed by an undergraduate cognitive science researcher at Yale University, the Decision-Style Test is a simple scientific assessment designed to capture and report critical dimensions of personality that are often ignored by other tests.

This explainer will cover the logic of the assessment and what makes its results uniquely powerful.

How do personality assessments work?

Most scientific personality assessments—like the well-known “Big Five” model—simply ask the test-taker to report their own traits and ultimately return a score that compares the test-taker’s responses to those of the greater population, often expressed as a percentile. For instance, a test might reveal that the test-taker is in the 75th percentile for extraversion and in the 30th percentile for agreeableness. This means that, in a room of 100 people randomly selected from the population, this particular test-taker is predicted to be more extraverted than 75 of them and more agreeable than 30 of them.

Knowing how one’s traits compare to others’ is undoubtedly helpful, but this single dimension by no means captures the full picture of personality. To understand why, consider the following analogy.

Imagine a class of students that are split into groups of three for a big project. Each student has a distinct role in their group: one will write a paper ( “A”), another will create a slide deck ( “B”), and the third will make a video ( “C”). We can imagine a few possible ways of assessing the students’ projects. One plausible proposal is to grade the students within each role, across groups. This means that the work of the student in every group who performed role A would only be compared to the work of every other student who performed role A in their group (e.g., “group one’s paper is much better than group two’s paper”)—and so too for roles B and C.

Another perfectly plausible grading scheme, however, could be to compare the students across roles, within groups. This would mean that within every group, roles A, B, and C would be assessed in comparison to each other (e.g., “group one’s paper was much better than group one’s video”) , without any need for referencing any of the other groups. 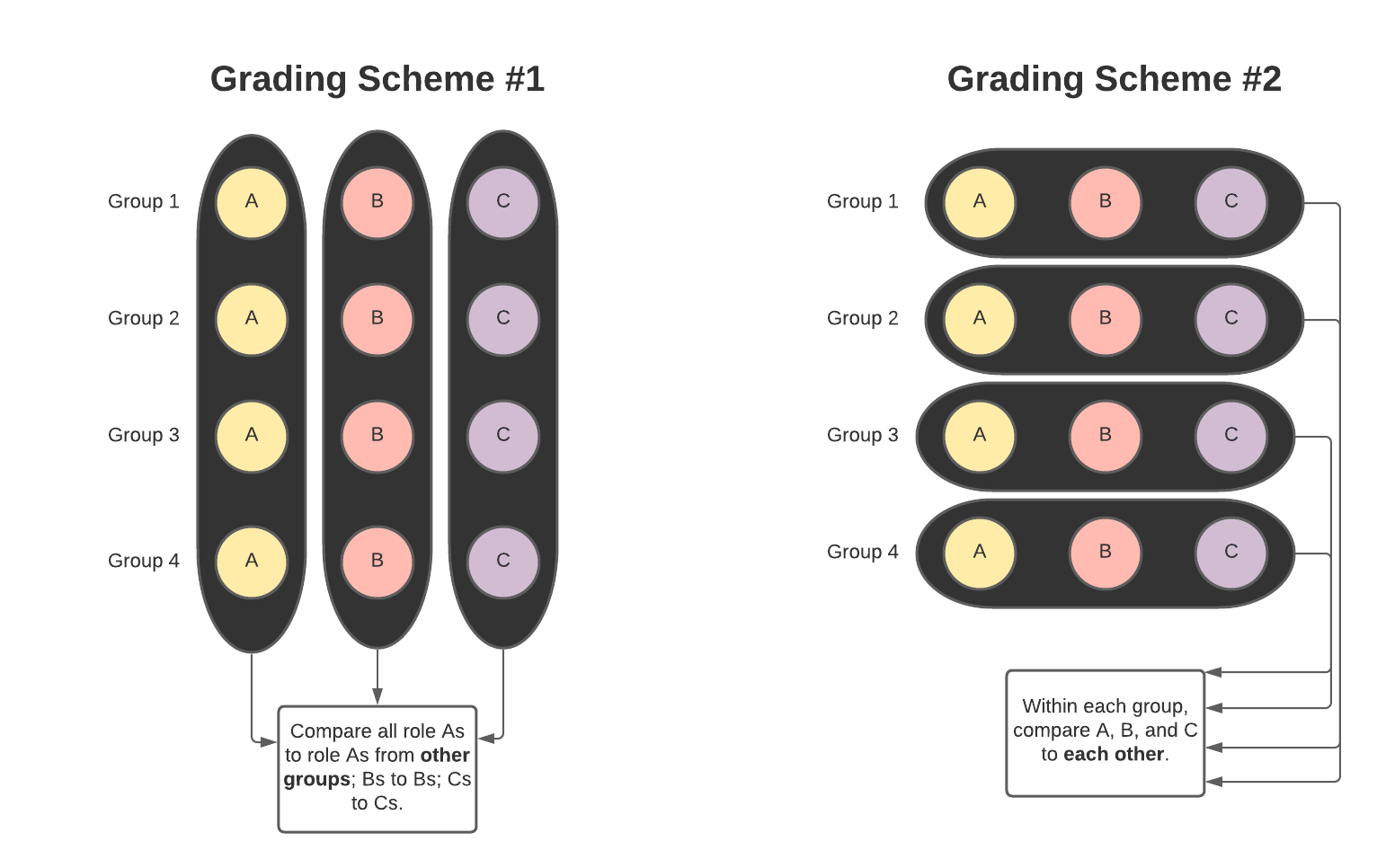 The same then goes for every trait in the personality model.

How is the Decision Style Test different?

The Decision-Style Test  is among the first of its kind to use the second method: it assesses the relative strength of the many traits within an individual.

For example, consider two traits from the assessment: self-focused motivations (e.g., generating personal income) other-focused motivations (e.g., caring for one’s family). These two motivations will have some relative calibration unique to each individual (e.g., “John is more motivated to care for his family than he is to generate personal income”). So it is not simply that we can compare our traits to those of the greater population—we can also compare our many traits to each other, and in so doing, gain a far clearer understanding of the rich internal dynamics of our personality. 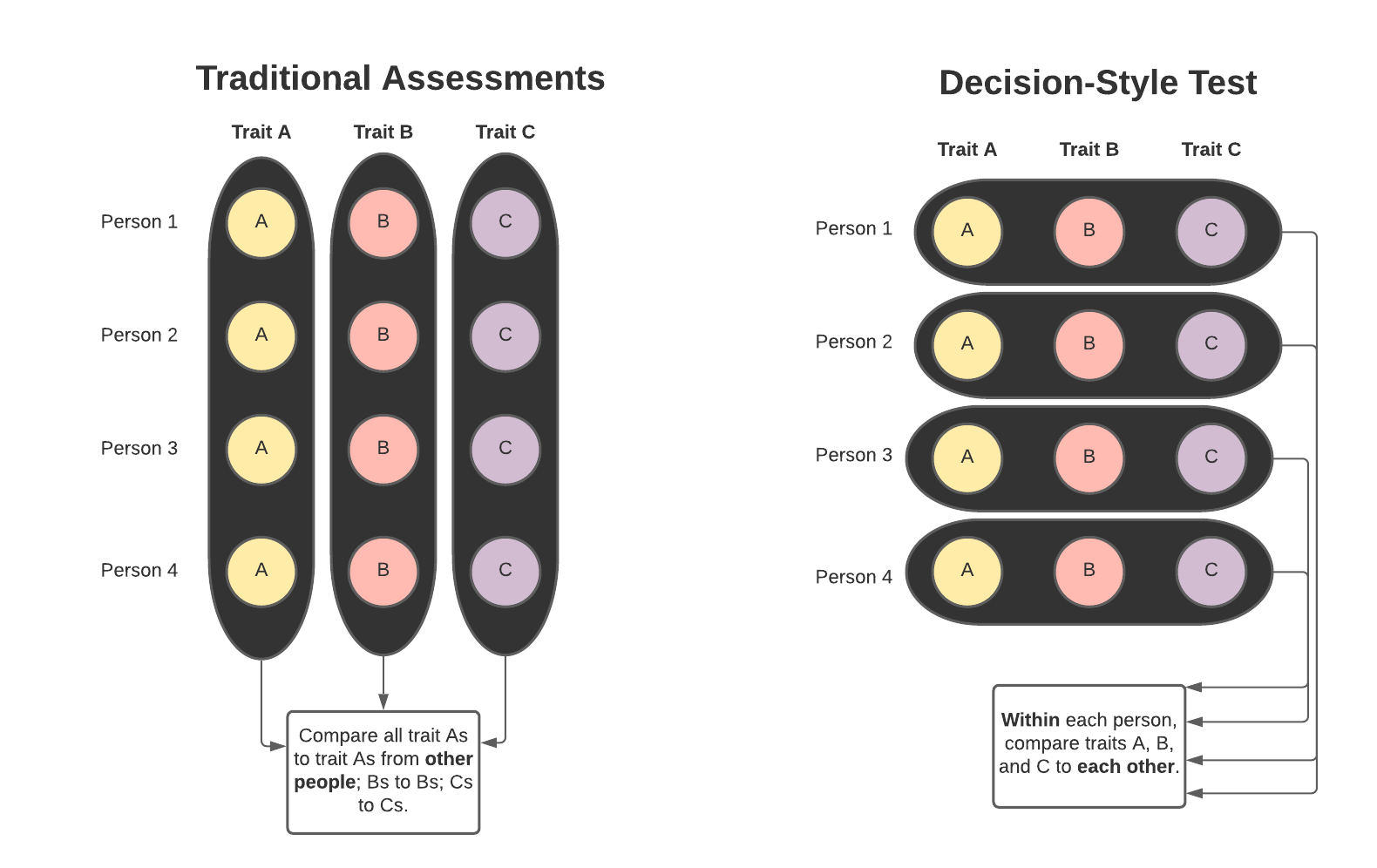 The Decision-Style Test sets out to do exactly this. Using the test-taker’s responses to a series of emotional, motivational, and intellectual trade-offs, the assessment builds a durable, predictive model of the test-taker’s generalized decision-making style—what we might also think of as the test-taker’s internal hierarchy of values.

(If you’d like to take a far deeper dive into the assessment’s methodology, structure, and predictive power, you can read and download the research that gave rise to the Decision-Style Test.)

What is its value?

After completing the assessment, test-takers are presented with a set of pie charts that depict their general decision-making tendencies. For instance, a user’s responses may indicate that they value self-focused goals 1.5 times more than other-focused goals.

This kind of statistic is powerful because it naturally scales across time. For the previous example, valuing self-focused goals 1.5 times more than other-focused goals would predict all of the following:

Another particularly valuable takeaway from the Decision-Style Test is that no result is clearly better or worse than any other: each is accompanied by a unique set of advantages and disadvantages. This realism is an indication of the test’s usefulness—human personality is human, and scientific assessments that cannot honestly capture both our strengths and weaknesses ought to be regarded with some skepticism.

A third feature that makes the Decision-Style Test fundamentally unique is that, unlike assessments that categorize test-takers into one type or another, it is statistically unlikely that any two people will ever get the same result. This reflects another strong intuition many hold about there being a fundamental uniqueness to every individual. As useful as type-casting personality tests can be, a high-quality assessment always ought to reflect the fact that each person indeed has their own, particular personality. While the Decision-Style Test imposes a clear simplifying structure on people’s characters, it still admits of a near-infinite degree of distinctions between individuals.

In summary, the assessment fills in numerous critical gaps in current personality models because it properly captures internal dynamics that are ignored by the standard “within trait, across people” approach.

Instead, by looking across traits, within people, the assessment captures and clearly reports information almost never included in standard personality assessments. We refer to this unique data as one’s decision style.

Cameron graduated from Yale with a BS in cognitive science with distinction in the major and as the inaugural winner of the Robert J. Glushko Prize for Distinguished Undergraduate Research in Cognitive Science. Cameron will begin as an AI Resident at Meta in August, where he will be conducting research at the intersection of reinforcement learning and neuroscience. Cameron has previously conducted and published research related to personality psychology and individual differences in decision-making.

Looking for a holiday survival guide? Here's how to prioritize your peace during this hectic season, based on your… t.co/pQt4o3kQGW
Here are five ways you can find, know and (re)learn how to be authentically you as an #Enneagram3:… t.co/4au5dIoIzp
An #INFP isn't always the easiest person to get to know. Here are strategies you can try to help INFPs who feel lon… t.co/0DgIO4wcRd
What is @elonmusk's DISC personality type? t.co/EAv3o00bkg t.co/r7EBxbOtZ3
Best job for the #ENFJ? Here's what ENFJs need in their jobs and the types of careers that fulfill those requiremen… t.co/GIBH9NOjiP