What Is the Enneagram of Personality?

Tips for Raising Kids as an Enneagram 8

Do Our Pets Have Enneagram Types?

What Is the Aquarius Personality Type?

9 Ways Personality Typing Can Improve Your Life in 2023

How to Make 2023 Your Best Year Yet, Based on Your Enneagram Type

What is the Best Career Test for College Students?

The Best Goal Setting Strategy for Every Enneagram Type

How NOT to Use the Enneagram

What Gift you Bring to the Holidays, by Enneagram Type

The Enneagram is a system of personality typing that describes patterns in how people interpret the world and manage their emotions. The Enneagram describes nine personality types and maps each of these types on a nine-pointed diagram which helps to illustrate how the types relate to one another.

The name Enneagram comes from the Greek: Ennea is the Greek word for nine and Gramma means something that’s drawn or written.

To find your Enneagram type, take the free test.

What Does the Enneagram Tell Us?

According to the Enneagram, each of the nine personality types is defined by a particular core belief about how the world works. This core belief drives your deepest motivations and fears — and fundamentally shapes a person's worldview and the perspective through which they see the world and the people around them.

Our core beliefs are not necessarily incorrect, but they can be limiting and operate as “blinders” for people. Understanding our Enneagram type and how it colors our perceptions can help us to broaden our perspective and approach situations more effectively.

The Enneagram also helps us understand how people react to stress. By describing how each Enneatype adapts and responds to both stressful and supportive situations, the Enneagram shows opportunities for personal development and provides a foundation for the understanding of others.

The basis of the Enneagram is a nine-pointed geometric symbol. It consists of an outer circle, on which the nine points (personalities) are numbered clockwise and evenly spaced. 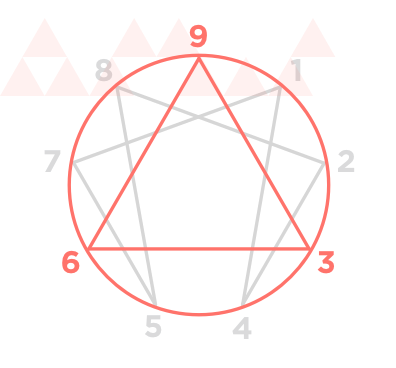 There is also a triangle between the points 9, 3 and 6 and an irregular hexagon which connects the other points. The circle represents the wholeness and unity of human life while the other shapes represent how it is divided.

The types on either side of each core type are called wings. It is believed that wings represent related personality styles which we can transition into, in order to develop new facets of ourselves. 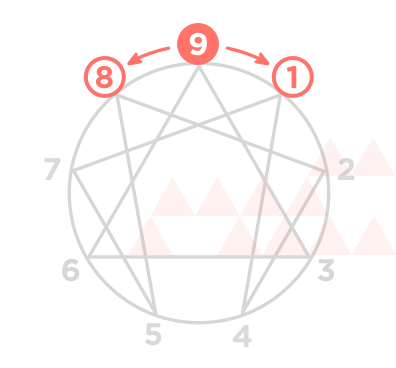 Many people identify strongly with the description of one or both of their wings, in addition to their primary type, and understanding the influence of the Enneagram wings can help to add more nuance to one's understanding of themselves. 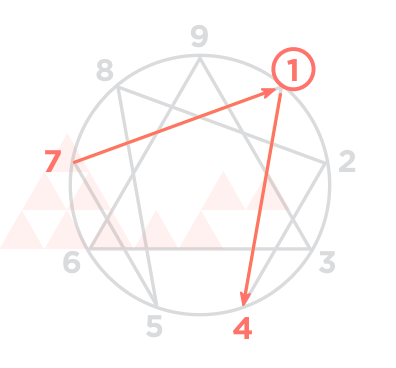 These connecting lines highlight how each basic type possesses indispensable strengths, but at the same time has darker sides that are full of challenges. The inclusion of these lines moves the Enneagram from a purely descriptive personality model to one that is dynamic, showing how personality can change under different conditions.

How the Enneagram Works

As each person grows into adulthood, they will find their motives and fears dominated by one of the nine Enneagram personality types. Your basic type is largely influenced by biological factors, but is also impacted by your environmental influences growing up — such as family dynamics or parental relationships.

The Enneagram uses a numbers system to designate each type. As it is a horizontal system of growth, no one number is better than another. Individuals may relate to more than one type, but the general opinion is that people do not change from one Enneagram personality to another. Rather, they resonate with different traits depending on their overall levels of health.

Each of the nine types have their own key motivations and fears that largely guide their actions and decisions. Read more about each of the 9 Enneagram types.

History of the Enneagram

We don’t know the exact origin of the Enneagram, but we do know it has an eclectic history. Some assume ancient roots in Babylon around 4,500 years ago while others place the origin in classical Greek philosophy around 2,500 years ago.

The model has been attributed to the Jewish Kabbalah, Christian mysticism and Sufism, a mystical form of Islam. In fact, it has been posited that Dante apparently had very good knowledge of the Enneagram since the characters in The Divine Comedy correspond largely to the Enneagram types!

What we do know is that the modern Enneagram system is the work of contemporary authors. Georg Ivanovich Gurdjieff, a mystic and spiritual teacher, introduced the model as a spiritual symbol in the 1930s, and it arrived on American shores in the 1960s.

Other notable 20th century teachers of the Enneagram are Oscar Ichazo and Claudio Naranjo. Naranjo, a Chilean psychiatrist, learned of the Enneagram through Ichazo’s work and is most well-known for introducing the Enneagram into the field of modern-day psychology. The system was later introduced to several religious and spiritual communities throughout the United States.

Most researchers today tend to focus on the psychological rather than the religious side of the Enneagram, drawing comparisons with other personality models like the Myers-Briggs system.

Applications of the Enneagram

The Enneagram is mostly used for personal self-knowledge and personality development, offering a powerful tool for better understanding your core motivations and applying that knowledge to all areas of your life, including conflict resolution, team dynamics, leadership and emotional intelligence.

Because it identifies opportunities for development for each individual type, it has become widely used in areas such as counseling, psychotherapy, business development, parenting and education.

The system has been the inspiration for multiple Enneagram personality tests as well as books on an eclectic variety of subjects, from personal development and spiritual growth, to relationships and even career development.

Christa Hardin (MA) has almost two decades of experience counseling and coaching couples. Christa hosts the popular Enneagram & Marriage Podcast. Christa uses the Enneagram and other great marriage tools to give couples deeper insight into how they connect with one another and glow brightly together in the world. For more, follow her on Instagram @enneagramandmarriage or visit her site: www.EnneagramandMarriage.com.

One of the most common relationship combinations is the Two and the Eight. Truity's Lead Trainer Samantha MacKay ta… t.co/znTKUV88Yg
While Sensation is often referred to as a focus on the five senses, there's a lot more to being a Sensing personali… t.co/hF3tizXl1v
Are you an Enneagram 4? Here are 5 ways you can tap into your lighter side: t.co/OSJ8Pj3vAI t.co/h4wQy3j5u2
Here’s what it’s like to raise kids as an #Enneagram8 — and some helpful tips on how to deal with the highs and low… t.co/2YTcfXaUBT
How can the Enneagram lead to better relationships? Truity’s Leader Trainer, Samantha Mackay, talks with Lynn Roulo… t.co/5rqGxnbW0g