Hate your job? How to use your personality type to find meaning at work

5 Famous Entrepreneurs and Their Personality Types

The Importance of the Inferior Function

A lot of people believe that while your straightforward four letter type explains your personality and behavior most of the time, you need cognitive functions to understand the moments when you seemingly act of character.
One of these people is Naomi Quenk. She is one of the most famous supporters of the theory of cognitive functions and type dynamic, but she is also the author of several books on the theory and former president of the Association for Psychological Type (APT) and director of the APT MBTI® Training Program.
In her books In the Grip and Was that Really Me?, she helps to popularize the idea that type dynamics can help to explain the moments where people act out of character. Specifically, she spends most of those books looking at the possible role a person’s inferior function plays in times of stress or struggle. According to Quenk, it is this function, located at the bottom of the cognitive stack and thus under the least conscious control, that determines how people act when upset. 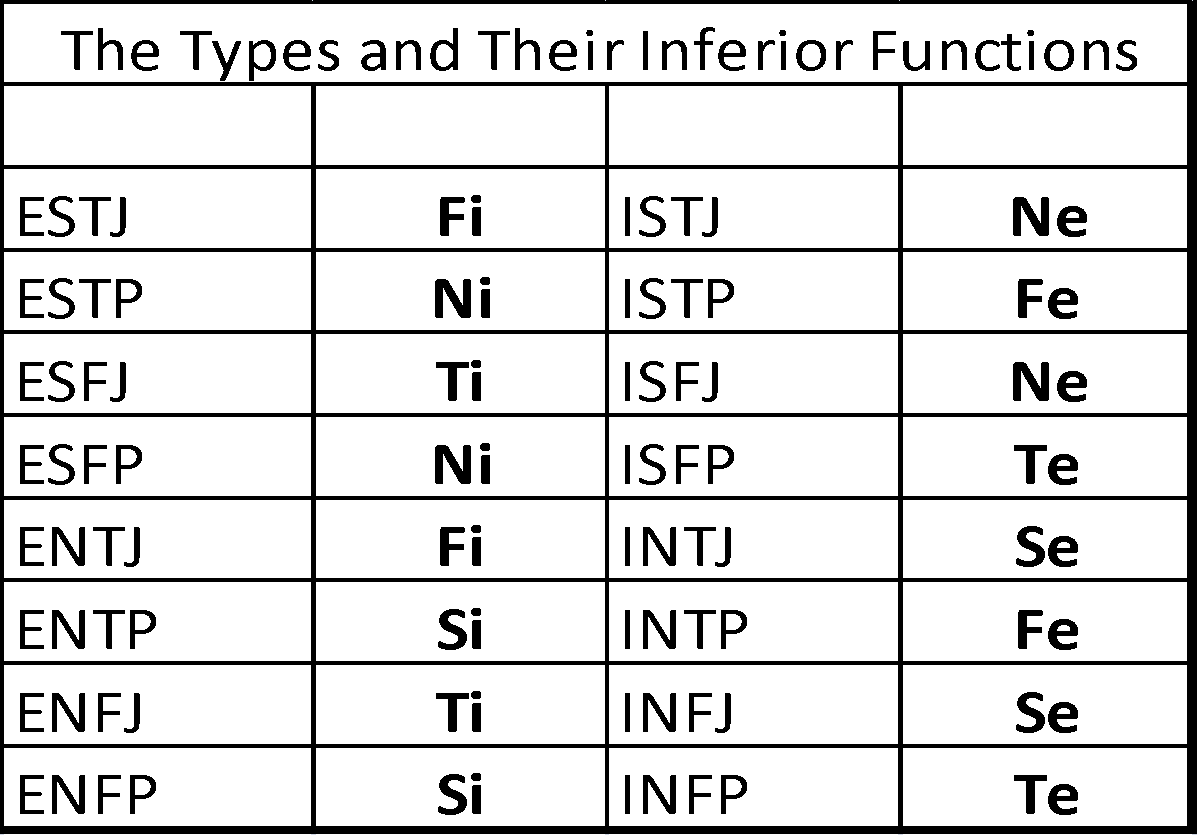 Quenk bases her arguments on Jungian theory and personal anecdotes from people that she has interviewed. She refers to someone displaying or acting on their inferior function as being “in the grip” or having a “grip experience.” Her books are full of stories about people’s “grip experiences,” and she suggests that such experiences are an example of the Jungian belief in a person’s psyche balancing itself.

An example of a “grip experience” would be an ENFP, a dominant Extraverted iNtuitive acting similarly to a dominant Introverted Sensor during a period of stress. In Was that Really Me?, Quenk provides the example of an overcommitted ENFP female remarking that she would “withdraw from everyone, sit alone for hours, and just think.” This, according to Quenk, is an example of her inferior Introverted Sensing (Si) rearing its head.

One of the first points that a supporter of cognitive functions is likely to make is that the theory can help to distinguish between two types that seem similar on the surface. Often, people debate if they are one type, or if they are another type that is only one letter different. It is not uncommon to hear someone make a remark such as, “I’m not sure if I’m an INTJ or and INTP.”
However, someone who believes in the theory of cognitive functions will point out that INTJs and INTPs actually share zero functions.

An INTJ’s cognitive stack includes dominant Introverted iNtuition (Ni), auxiliary Extraverted Thinking (Te), tertiary Introverted Feeling (Fi), and inferior Extraverted Sensing (Se); meanwhile, an INTP’s cognitive stack consists of dominant Introverted Thnking (Ti), auxiliary Extraverted iNtuition (Ne), tertiary Introverted Sensing (Si), and inferior Extraverted Feeling (Fe). If you’re keeping track, all eight cognitive functions are represented between the two types, but none of them are repeated. Thus, based on the theory of cognitive functions, you should be able to easily determine which type you actually are, once you familiarize yourself with all of the functions.
The J/P preference is the only one that will make two types with only one letter different not share any functions. For example, an INTJ and an ISTJ will share two out of four functions.

You will note that the functions they do not share are their dominant and their inferior. Thus, both the first function that they developed and use most consciously, according to the theory of cognitive functions, and the function that they unconsciously turn to in times of stress are opposites. And that makes an INTJ and an ISTJ seem a lot more different than when you think of it in terms of just switching one of the letters.

Others take the previous argument. Popular Thought Catalog writer and personality type aficionado Heidi Priebe advises that cognitive functions are the best way to determine your own or someone else’s type. Her reasons for preferring the use of cognitive functions over many online tests are as follows:

The dichotomous nature of the four-letter typing used in personality typing is one of the main criticisms that cognitive function supporters voice about those who don’t ascribe to the theory. Many argue that the theory of cognitive functions and type dynamics is what takes Myers and Briggs’ theory beyond simply being about sixteen types and simple dichotomies. Priebe would likely agree with Naomi Quenk on the idea that type dynamics is what makes personality typing “more than the sum of its parts.”

At this point, you might be wondering why the theory of cognitive functions is so dang controversial. After all, one can make a pretty good argument for cognitive functions. They help you understand why people act out of character in times of stress, and they can help you decide which of two seemingly similar types you actually are—or they can allow you to type yourself or someone else in the first place!
However, as you will see in the next part of this series, there are plenty of arguments that can be made against the validity of type dynamics. Whether or not those will change your mind remains to be determined.

I like the article.. especially when you brought the attention to the different inferior functions.

I beleive the key to complementarity/conflict lies in the cognitive functions but have difficulty finding an article that really explains the source of the mis/matches.

Could you guide me to a paper/article/blog to explain how/why the cognitive functions affect the relationships between two type?

Do you not like your job? Here's how you can use your personality type to find the right type of work:… t.co/AKMZeLwcII
What are the four core emotions of the Enneagram? Take a look: t.co/j5j4hRYjiS t.co/GwC7T6tFtr
Having clear boundaries enables us to say no to things that drain us, aren’t aligned with our vision, and undermine… t.co/m6NZh6UvPu
INFP’s need a career that is in alignment with who they are and their personal values, while also allowing them spa… t.co/m25MX9lNhe
What types are most compatible with the #Enneagram8 personality type? Find out: t.co/zjGGX1xgbi t.co/vbhM9J7uDs