The theory of type dynamics is based on psychologist Carl Jung’s theory of cognitive functions. According to Jung, we each have four basic ways of taking in information and making decisions. Jung called these cognitive functions sensation, intuition, thinking, and feeling—which should sound familiar to anyone who’s studied personality typology. In Jung’s framework, thinking and feeling are defined as judging functions, because they help us make decisions; sensing and intuition, on the other hand, are perceiving functions, because they define how we perceive information. If that all sounds a bit convoluted, hang in there—it will become more clear.

In 1962, Isabel Briggs Myers extrapolated on Jung’s original idea, creating the core of what is now the theory of type dynamics. She took Jung’s concept of primary and auxiliary functions and ran with it, using the word “dominant” rather than “primary.” She decided that Jung’s statement that, for any given person, these two functions would be different in all respects meant that one would be extraverted and the other introverted. Similarly, one would be a judging function and the other a perceiving. A person’s dominant and auxiliary functions would be opposite in both direction (extraverted or introverted) and nature (judging or perceiving). If a person’s dominant function was Extraverted Feeling, then their auxiliary function might be Introverted Intuition.

The extraverted functions are those which are most apparent to an observer. For example, the most noticeable quality of an ESTP is the way she lives in the moment and focuses on what’s happening now—which is also called Extraverted Sensing. Meanwhile, an ESTJ uses his sense of logic and reason to put his surroundings in order—demonstrating Extraverted Thinking. As a Perceiver, the ESTP shows us her perceiving function (Sensing). As a Judger, the ESTJ shows us his judging function (Thinking).

Eventually, each type’s specific combination of dominant, auxiliary, tertiary, and inferior functions became known as the type’s “cognitive functions” or “cognitive stack.” Later editions of the MBTI Manual endorsed this position, and type dynamics were described in detail in the 1985 and 1998 editions.

So, how does this theory actually apply to the 16 personality types that we’re all familiar with? First, let’s look at the eight cognitive functions. According to the theory of type dynamics, each type primarily uses four of the following functions:

For a concrete example, let’s use me and my type. I am an INTJ, so according to type dynamics, my dominant function is Introverted iNtuition (Ni). It is introverted because I am an introvert, but it is a perceiving function because—according to Grant and Brownsword’s extrapolations on Briggs Myers’ theory—my judging function must be extraverted, and therefore is my auxiliary function. 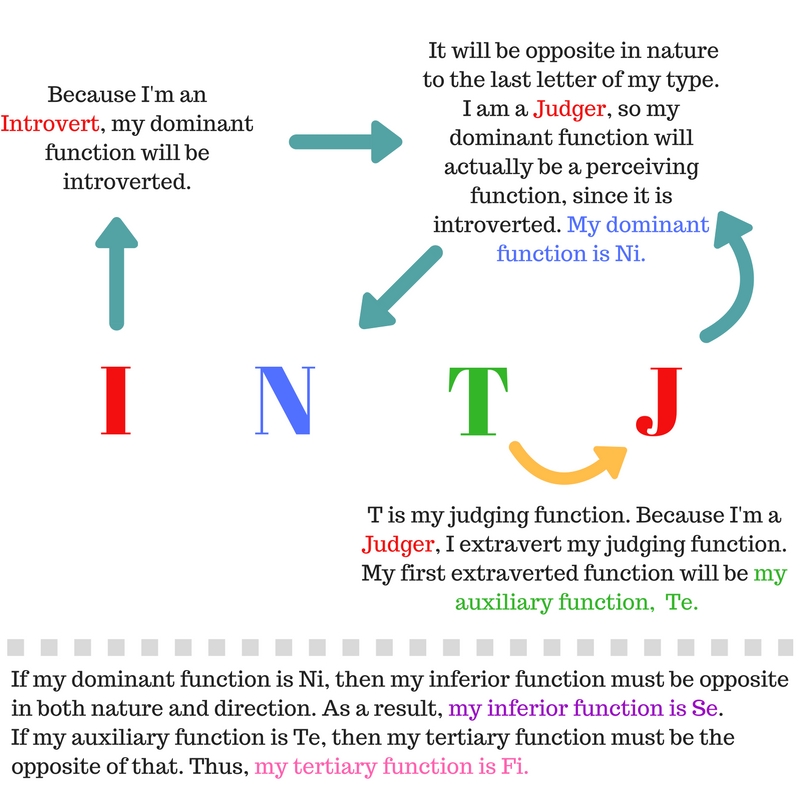 If you would like to avoid the mental gymnastics of figuring out your own cognitive stack according to the theory of type dynamics, you can use the following chart. 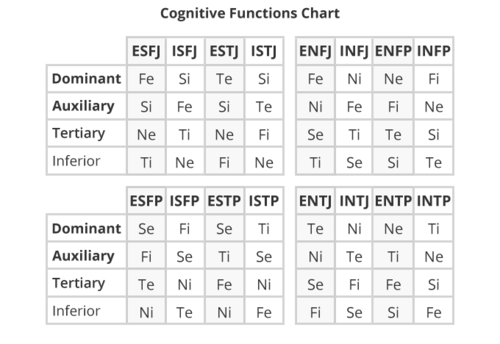 After figuring out your cognitive stack based on type dynamic theory, you can finally set about figuring out what that means about you. Jung believed that the dominant function was the one over which a person had the most conscious control over and to which a person directed most of his or her “psychic energy.” In turn, the other functions in a person’s cognitive stack are under a decreasing amount of conscious control. 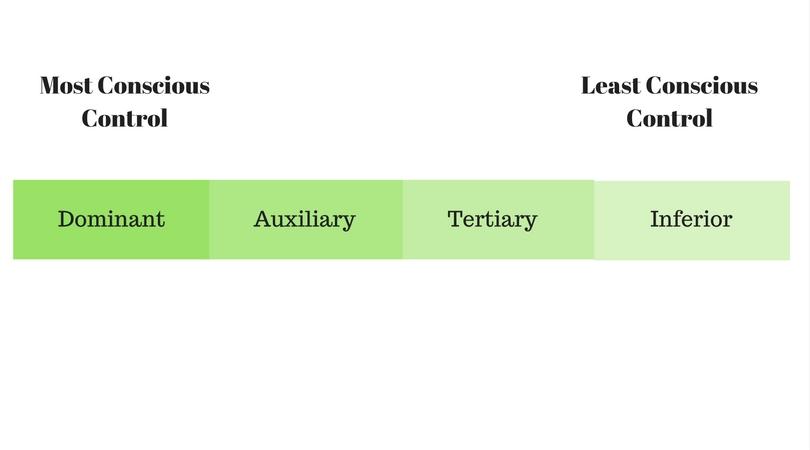 When reading a description of a cognitive function that is a part of your stack, it would theoretically be most representative of you if it is your dominant or even auxiliary function, as they would be the most developed. Earlier, I provided a simple, one-line description for each function, based on a synthesis of several sources and my own understanding of the functions. For a more comprehensive picture of each function, you may want to read multiple sources. I have found that some sources seem to be weak in their descriptions of particular functions, possibly because the author does not have that particular function in his or her cognitive stack. That said, some good descriptions of the functions can be found here, here, and here.

In the next part of this series on cognitive functions and type dynamics, we will look at the arguments in favor of the validity of type dynamics.

Can someone link me to a good cognitive stack test? I tested once but I got Ne dominant- but it typed me as an INFP (which I know my really own type)

Thank you for this. I can TELL you're an INTJ by how thoroughly and logically you explained it. I spent an hour with a pencil and paper trying to decipher my own cognative stack for myself and also for my husband. He's also an INTJ and probably could have mastered this in 5 minutes, but he was busy in the next room with his astronomy research. It took me forever and hurt my brain, probably since "Te" is my inferior function! (INFP) This was by far the best and most thorough information I've found online about this. So, thanks again!

Looking for some Introvert-friendly fun in the sun? We put together the ultimate summer bucket list for #Introverts… t.co/oVwKh8FIsW
Got #ImposterSyndrome? Here are 9 tips to help you deal with it: t.co/6XPpqTmIdx t.co/BJ6LbEjnLN
Are you an #Enneagram 4? Here are 7 career struggles that will sound all too familiar: t.co/sJI9ybXKQ4 t.co/nmJZbkRxXL
Management is a tough job, which is why it's important to know your leadership style: t.co/rdisdGS42g t.co/n6vthzLW2e
Confessions of an unhealthy #ISTJ: t.co/hkoyfbWRrg t.co/JxuGDD27Ks