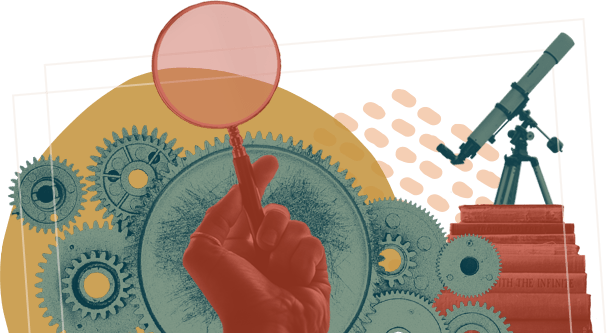 How to Prioritize Your Peace During the Holiday Season, by Enneagram Type

How to Be More Authentically you as an Enneagram 3

Here’s What You Love and Hate About Thanksgiving, by Enneagram Type

How to Love an Enneagram Body Type (Types Eight, Nine and One)

How to Love an Enneagram Head Type (Types Five, Six and Seven)

Here’s what Halloween Creature you are, by Enneagram Type

What is the Most Common Enneagram Type?

Best Spooky Movies to Watch this Halloween, by Enneagram Type

Which Truity Team Workshop is Right for Your Team? Comparing the Typefinder® and Enneagram Workshops

What is the Rarest Enneagram Type?

Enneagram Fives are defined by their desire to conserve their energy and to avoid being drained by engagement with the outside world. They focus on being knowledgeable and competent so that they can be as self-sufficient as possible.

Fives enjoy deepening their understanding of the world, expanding their intellect, while minimizing their physical and relationship needs.

Deepest Fear: Fives fear being overwhelmed by their own needs and the needs of others. To cope with this fear, they withdraw from relationships and maintain a minimalist lifestyle, focusing on the intellectual as an escape from the demands of the world.

Core Motivations: Fives are motivated by a desire to be competent and possess a strong understanding of their environment. This motivation drives them to a nearly constant state of learning and knowledge accumulation.

Key Personality Traits of the 5

How Rare are Enneagram 5s?

Investigators are the pioneers of independent and critical thinking. They’re inquisitive and curious about the connections between underlying themes and the mysteries of the universe.

Usually introverted and analytical, Investigators gather and process information to build with and synthesize patterns and ideas.

Their work spaces are typically minimalist with the exception of a collection of items pertaining to their core interests. They’re also fiercely non-conformist and care little about trends or accepted ways of progressing through the stages of life.

Type Fives are the most introverted of the Enneagram types, in the sense that they direct the most focus and energy inward. Rather than focusing on relationships, the Five's primary focus is on gaining knowledge.

Because they have little energy for external demands, Fives are careful to conserve their energy for the things that matter most. This can make the individual appear withdrawn and disinterested in outer world events.

Investigators are part of the “head-based” triad of the Enneagram, along with the Type Six Skeptic and the Type Seven Enthusiast. The types in this triad are motivated by their varying responses to fear. Fives attempt to avoid fear and anxiety by withdrawing and carefully protecting their inner resources.

Fives are self-sufficient and crave freedom and autonomy from outer world influences. However, true growth for an Investigator happens when they learn how to let people in and open themselves up to receiving love and support.

5w4: The 5w4 type is a Five who shares many similarities with the Type Four Individualist. Like Fours, 5w4s tend to be more in touch with their emotions and more self-expressive than other Fives. This type tends to be creative, reflective and sensitive. Common career paths for this type include author, composer, inventor, professor and engineer.

5w6: Enneagram Five wing Six types are Fives who relate to several characteristics of the Type Six. 5w6s are practical, helpful, and organized. While still fiercely independent, 5w6s tend to be more cooperative and loyal than other Fives. They excel in troubleshooting and solving complex problems. Popular careers for this type include accounting, computer science, law enforcement, mathematics and engineering.

How to Recognize an Enneagram 5

Investigators are often stoic and detached. They’re fascinated by the ever-expanding realm of unexplored ideas.

Fives are energized by spending hours of time alone, tinkering with their personal projects and research. The path to mastery in a particular area is a journey each Investigator readily embarks on.

They may appear calm and collected on the surface, but when topics of interest come up in conversation, Fives transform into a giddy and energetic version of themselves. This sudden gear-shift may surprise those who are unaware of the Investigator’s hidden passions.

When they are healthy, Fives become thought pioneers in their fields of interest, and are generally regarded as integral to the intellectual advancement of society. They see large, complex issues with clarity and precision. Through dedication and genuine curiosity, they’re able to catalyze change and advance societal movements. The impossible becomes possible for Investigators, who can bring forth new inventions, systems and ways of thinking with quiet confidence. They become subject matter experts who freely share their wisdom and discoveries with the public. With a talent for simplifying the complicated, Investigators have the potential to communicate previously mind-boggling topics with radical clarity.

When they are average, Fives are offbeat, withdrawn and emotionally closed off. They may have a select few esoteric interests which they keep hidden from the public eye—and opt to present an aloof and distant aura. They’re well-versed in topics of their interest and may be seen as a ‘bookworm’ by peers. During their free time, Investigators tap into the different worlds they’ve created in their minds to escape from the mundane aspects of everyday life such as chores or errands. They may delve into their large collection of books, for example, or enjoy playing strategic board or card games for leisure.

When they are unhealthy, Fives cut off their entire social world, and may develop tunnel vision. They begin to have far-off and radical views, losing grip with reality. With a lack of emotional awareness and foresight, Investigators can find themselves in heated disputes with no clear answers. As a result, some friendships may be severed in the process, which would certainly baffle Investigators. They may rationalize that they’re better off without the presence of people altogether and choose to escape the real world. In addition, they can become addicted to far-off theories few can wrap their heads around and stubbornly cling to a sense of intellectual superiority. This ultimately drives people even further away. At their worst, Investigators can become misanthropic and bitter.

Enneagram Type Fives are focused, mysterious and are typically quite romantic at the beginning of a relationship. Their flavor shows up when they find a partner that intrigues them and, though they tend to be anxious about the outside world and may isolate themselves, they often settle quite happily in marriage with someone they love and trust. When they do lose interest, it’s usually because they met a friend with a shared niche, or they lost the fun and intrigue of the relationship as they figured their spouse out, or they felt overloaded.

Even if they get tired or bored however, it’s important for Fives to remember that no relationship will ever satisfy them perfectly, but it still means we show up and try. Also, Fives need to realize that by going farther down the research hole, they miss out on the energy that can be gained from the virtue of openness. They should try to understand that no amount of research will build back the consistent lack of confidence in their abilities that a Five feels deep down. Instead of trying to hoard information or goods as a defense against this perceived lack, a Five must learn to be content with “enough” versus “all.” Often, relinquishing control and trusting God or a higher power can be a helpful tool for Fives, and can allow them to remember their strengths, or at least try to gain faith in the process of resting and actively sharing.

Emotionally, Fives have trouble moving from their withdrawing, past-focused feelings and inhibited posture to a place of emotional processing, even when their spouse or others have tried to share this with them. This is because they fear their lack of competency. This may be the consequence of facing humiliation, illness, bullying of some form, a gross lack, or a deep sense of overwhelm that was hard to recover from.

If you love a Five, remember it takes them a few days to logically understand their own and your feelings, and they don’t want and likely can’t execute the same level of socializing you can. Remember also, however, that their love delves deep and you can find them thinking about you in small, thoughtful acts that take much of their time and energy. Partners of Fives usually pick the Five initially for their focus on them, their laid back attitude, and their wit and stability. So, it’s helpful when they don’t demand things the Five doesn’t have as their gifts, such as being the life of the party, or being spontaneous, for example. It’s also so important to build up a Five as they need your encouragement to make it through the often grueling days of processing analytically. Encouraging them to take care of themselves, especially with physical activity, is also advised.

Even if they have trauma or illness from the past, remind your Five to take it one day at a time, but honor their story and journey when they do finally open up. If they can’t share feelings, help them to work on this little by little with the help of a counselor or coach, but understand that their feelings are often hard to access. Knowing this, build them up with healthy thoughts about themselves and your relationship frequently, letting them know how strong you think they are, how much you appreciate them and how much you admire them. Click here to find the Enneagram and Marriage Glow Pairing Guides so you can find tips for a type Five with each of the individual types!

What are the best assessments to help you choose a college major? Here are three Truity career tests that are free… t.co/aZqVzlqzCU
18 famous people you probably never realized were ISTJs: t.co/gPajWsHj9y t.co/1in4kk2JWN
Looking for a holiday survival guide? Here's how to prioritize your peace during this hectic season, based on your… t.co/pQt4o3kQGW
Here are five ways you can find, know and (re)learn how to be authentically you as an #Enneagram3:… t.co/4au5dIoIzp
An #INFP isn't always the easiest person to get to know. Here are strategies you can try to help INFPs who feel lon… t.co/0DgIO4wcRd