Type A vs Type B Personality: Ask These 6 Questions to Figure Out Which One You Are

Which is the Most Difficult Enneagram Type to Type?

Temperaments have a long history. These four holistic patterns of human behavior and motivation have been in use long before any of the more sophisticated models of personality were studied and developed. While they have been around a long time, they still are valuable and useful.

In this article, I’m going to walk you through the four temperaments – how they came about, what they tell us, how they connect with the Myers and Briggs personality system, and why we’ve given them a re-brand using language that makes more sense to us today.

What do the temperaments tell us?

Temperaments describe four core patterns of motivations and behavior that influence our perspectives, decisions, aspirations and character. We all have one temperament that we prefer over the others.

Your temperament doesn’t change, but matures as you grow and develop. You may not display or resonate with all the traits listed, but there will be something about the core motivation that you need to fulfill on a daily basis. Something you are driven to attain, otherwise you will feel distressed or confused.

History and evolution – What’s in a name?

The temperaments have evolved over the centuries. They were first described by Hippocrates in 450 BC when he observed these four common motivations in people. A little while later (190 AD) Galen, a Roman physician, connected these temperaments to the four bodily humors as they were known at the time: choleric, melancholic, phlegmatic, and sanguine.

Plato, also drawing on Hippocrates, looked at the temperaments in the context of how people contributed to society, and in Greek, called them iconic, pistic, noetic and dianoetic – which mean making art, caretaking, moral philosophy and logical investigator.

Over the centuries, different authors have given the temperaments different names based on the contexts and perspectives from which they explored them. But the commonality between each author’s version of the temperaments continued to shine through.

While Keirsey acknowledged that temperaments derive from our underlying motivations and need to feel satisfied with our lives in some way, he preferred to focus on observable behaviors. That is, he wanted to shift away from what was happening hidden inside the mind and focus on the actions each of us take.

Initially, he named each of the temperaments after Greek gods, whose behaviors were observable through clearly articulated myths and legends. Those gods were Dionysis, Demeter, Apollo and Prometheus. But as knowledge of the Greek gods waned, Keirsey updated his names of the temperaments to reflect the names Plato had chosen, but in English.

While these four names, Guardian, Artisan, Rational and Idealist are still commonly used, we felt that, just like the Greek gods, their meaning was becoming harder for modern society to quickly grasp.

At Truity we want personality tools to be practical, accessible and easy to apply. We also focus on underlying motivations and drivers, and so we looked for modern words that would meet all of these requirements.

Hence our updated names are Responder, Preserver, Theorist and Empath.

As temperaments have a universal quality to them, it’s not surprising that the motivations are also seen within the Myers-Briggs theory, developed by Carl Jung, Katherine Myers and Isabel Briggs.

When Myers first published her book, The Myers-Briggs Type Indicator in 1962, she was already referring to the 16 types as belonging to four distinct groups - NT, NF, ST and SF - a combination of the middle two letters of each of the 16 types. Through the lens of temperament, Kiersey saw the groups a little differently.

He saw temperament as being driven by two things: focus and approach. “Focus” refers to the kind of information we pay attention to and the words we use to communicate. Kiersey divided these into two categories, concrete and abstract. These are roughly the same as Myers categories of Sensor (S) and Intuitive (N).

(Myers felt those with a preference for Sensing tended to be more concrete and focused on observing the immediate world around them, and that Intuitives were more abstract, imaginative and interested in observing what couldn't be seen.) 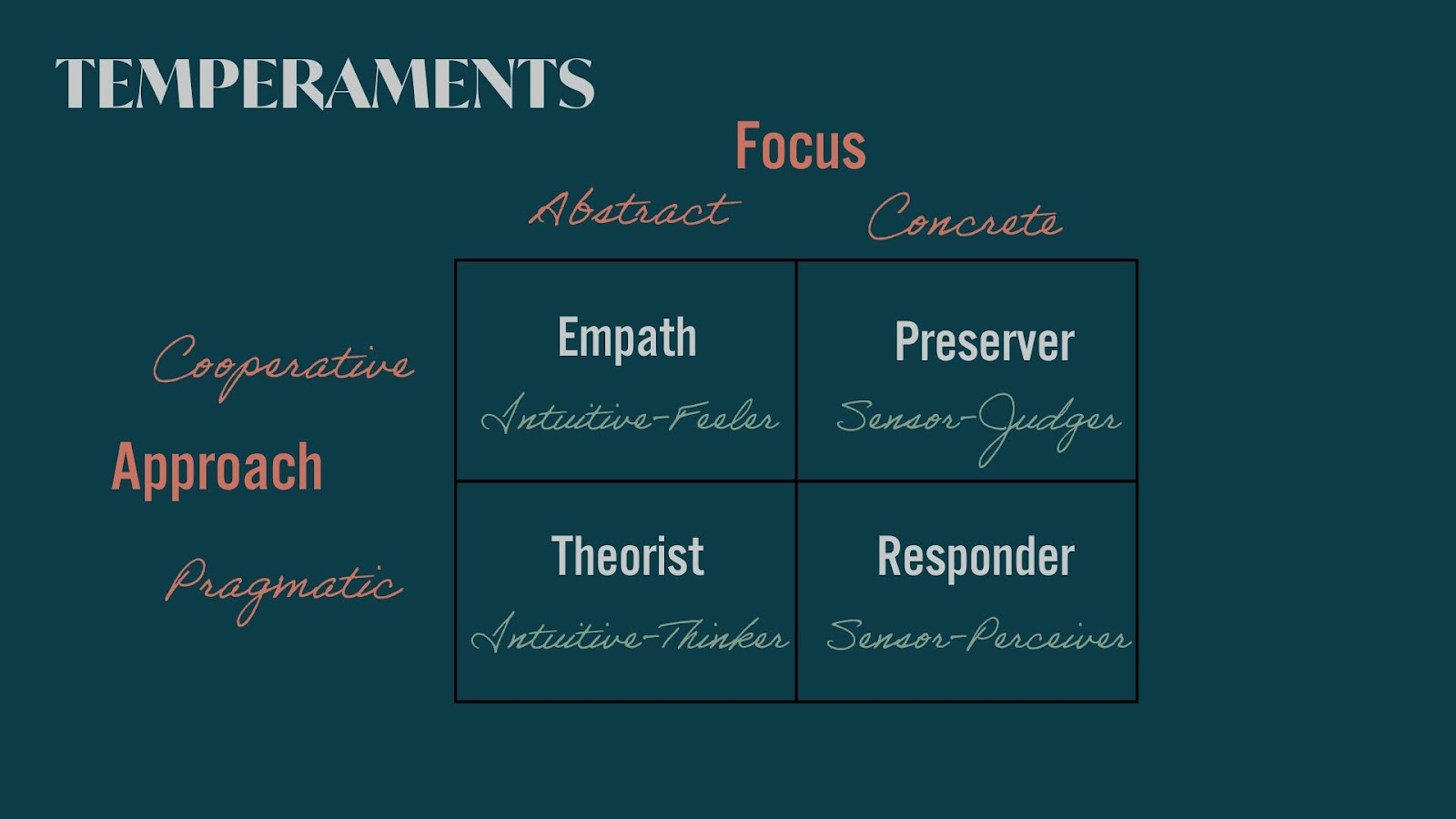 “Approach” is about how we approach our work, or what we believe is the best way to get a job done. Kiersey defined two categories for this: Pragmatic and Cooperative. Those who prefer to be pragmatic want to get the task done efficiently, with minimum effort and the least amount of fuss. They are willing to ignore the rules or social norms in order to be effective. Those who approach tasks cooperatively believe the best way to get a job done is by getting along with others, following laws and social norms, and accommodating others' needs and requests.

From Myers' perspective, the Thinking/Feeling dichotomy is the main one to apply. This focuses on how we evaluate information, make decisions and take actions. Thinkers (T) tend to be more task focused, and Feelers (F) tend to be more relationship focused.

But when Kiersey looked at the core motivation and corresponding behaviors of each of the 16 types, he saw that while that applied to Intuitives, it didn’t apply for Sensors. Sensors focus on their immediate environment and how they wanted to interact with it, shaping whether they would be more cooperative or pragmatic. Hence the need to look at Myers’ final element of personality type: Judging (J) and Perceiving (P). This indicates the kind of environment we want to live in. Judgers tend to prefer an environment that is more organized, structured and scheduled, while Perceivers prefer an environment that is more free-flowing and explorative.

All SPs want to react to the environment around them immediately in some way. SJs want to create order, to protect and preserve. Hence, this aligns with the temperaments more than the SF/ST split.

If you know the four letters of your Myers-Briggs type, you’ll be able to identify your temperament quite quickly. Otherwise, take our Typefinder assessment to learn more.

Now let’s turn to the four modern temperaments. Here’s a brief overview of what each temperament looks like. For deeper explanations, you can watch the matching video here.

Responders, Sensor-Perceivers, want to respond to life as it's happening. They are adaptable problem solvers who find following plans limiting and dull. They are quick to assess any situation and take practical steps to remedy it with whatever tools or resources they have at hand, always ready to get their hands dirty.

Believing life is to be enjoyed, Responders are always up for fun, exciting adventures, especially if it’s something they haven’t tried before. They gravitate towards activities like stand-up comedy or improv, whitewater rafting, driving a racing car, guiding students on a week-long canoeing trip or negotiating a hostage situation.

People describe the Responder as: spontaneous, flexible, fun-loving, down to earth, practical, easy-going, casual and funny.  They can also describe them as irresponsible, frivolous and risk takers.

Preservers, Sensor-Judgers, want to be responsible, to know they are contributing to the smooth running of society. They seek order and structure, appreciating traditions and maintaining the status quo. Never one to shirk their duties and responsibilities, they work hard, doing what is needed and expected until the task is complete, whether that's at work, home or in their community.

Believing life is about serving others, Preservers aim to do their duty. They ensure that family traditions like Christmas or Thanksgiving go smoothly, coach Little League or attend body corporate meetings, and follow rules like respecting one’s elders or measuring ingredients for a cake precisely.

People describe Preservers as: reliable, conventional, dutiful, traditional, detail-oriented, predictable and hardworking. They can also describe them as: change adverse, cautious and inflexible.

Theorists, Intuitive-Thinkers, want knowledge and approach life like a scientist: creating hypotheses, testing theories and connecting complex ideas with rational understanding. They seek to understand the principles behind the systems they observe. Once they understand it, they want to apply it to solve complex problems.

Believing life is about learning, Theorists are always in search of knowledge that is abstract yet clear. For them, fun is debating the family about whether their traditions are still valid, investigating the flora and fauna in the garden, attending a conference on their favorite topic or running experiments on the people or systems in their lives.

People describe Theorists as: analytical, intellectual, thoughtful, skeptical, inventive, unconventional and open-minded. They can also be described as unemotional, distant and aloof.

Empaths, Intuitive-Feelers, want to release the potential within others. They focus on people, their needs and gifts, and seek to support them. They bring people of all backgrounds together, finding new ways to live and work together and wanting to make the world a better place.

Believing life is about meaning, particularly meaningful relationships, Empaths spend their time helping others. Whether it's studying to be a therapist, providing emotional support to their friends, or meditating on their values and how to live by them, Empaths advocate for the weak and helpless, counsel the grieving and coach people to be better leaders.

People describe Empaths as: compassionate, caring, sympathetic, imaginative, artistic, tolerant and progressive. They can also be described as gullible, idealistic, and impractical.

So that’s the temperaments in a nutshell. To discover your type and temperament, take our free Typefinder test.

Samantha is the Lead Trainer at Truity and will shortly be a certified Enneagram Coach. She believes our personality is the key to navigating life's strangest hurdles. Despite her best efforts Samantha is an ENTP and Enneagram 7, who is always surrounded by a pile of books, a steaming cup of tea and a block of her favourite chocolate. Samantha is currently studying with Beatrice Chestnut and Uranio Paes of CP Enneagram Academy undertaking their Professional Enneagram Certification. Currently located in Auckland, New Zealand. Find her on LinkedIn: https://www.linkedin.com/in/samanthamackay/. Check out her course "Unlocking the Power of Your Personality" at www.truity.com/training

I am a bit of both a empath and preserver . A long time ago I got preserver but such then when did the temper ant test I always seem to get empath. That matches my personaitly ( mbti) type INFJ. I agree with both of those Tempe rants

I mean the type finder quiz. By the quiz I mean

Are you a #TypeA or #TypeB personality type? Ask yourself these 6 questions: t.co/ZNlCb4lLl2 t.co/yiv8QsmIMv
Enneagram Sevens — what are your favorite TV shows? t.co/l1iNsniWwF
Can you guess which #Enneagram type is the most difficult to type? t.co/5ImTWcEPYc t.co/r0I8MbqZs5
Are you an #Enneagram8? Do these 7 things before falling in love: t.co/59F6VRjWeU t.co/PQtZIECTwh
Do you use personality type in coaching? If not, you're missing out. Here are five ways to use the TypeFinder with… t.co/XY4i6O1ZJF