With more and more people now fully vaccinated and mask restrictions being lifted, many employers are going to great lengths to get their people back in the office.

In May of 2021, Truity published some fascinating original research which examined which people would be more eager to return to the office. Among its key findings were that Extraverts, leaders, managers and men were much more enthusiastic than Introverts, non-titled employees and women.  This article offers insights into how the combination of two of peoples’ inborn preferences for introversion or extraversion and for Thinking or Feeling may be the most influential factor.

Remote work…you either love it or hate it

But before we go there, let’s consider some of the factors which may influence employees’ motivation to return to the workplace. While there are many, certainly at the top of the list is the current status of the pandemic where an individual lives, as well as predictions as to whether the infection rates are likely to rise or fall. Adding to the frustration is the unpredictability of mutations, and advice that seems to change daily from medical and governmental authorities.

The pandemic has had a major impact on caregivers – especially those caring for children and aging relatives. And not surprisingly, there are now many more sick people who need care.

For some people, working remotely has been excruciating; for others it has been a Godsend. I’ve actually heard more than one person tell me that these have been the best two years of their lives! While I’m sure only a relatively small number of people would agree, the most recent polls do show that a majority of workers would prefer to continue working from home. As someone who was lucky enough to do so throughout both my kids’ childhoods, I can attest to the many benefits.

Work-life balance and The Great Resignation

There’s no doubt that the pandemic has brought about a seismic shift in many peoples’ priorities and how they’ve come to view work. Although the term “work-life balance” has been around since the ‘70’s, it’s received much more attention and taken on greater urgency over the past two years.

Sadly, a significant percentage of workers – especially in the health professions – are simply burnt out.  They’re not the only ones. According to Gallup, small business owners as well as construction, sales, service, transportation, media, manufacturing and clerical workers have all suffered significant layoffs, with many choosing not to return once they were called back.

Across many industries, those close to retirement age with the resources to pack it in, have done so in record numbers. Personally, I’ve been dismayed that more than one of my physicians who had planned to work for several more years, have decided to call it quits. Besides healthcare, the pinch has been felt especially hard by school systems across the country who are scrambling to hire new teachers to replace tens of thousands of retiring seasoned ones.

I’m guessing that millions of trees have been sacrificed to produce articles about “The Great Resignation.” Although it’s most often explained in economic terms, I think for many, the primary cause has been a fundamental realignment of their values. In researching and writing Do What You Are I learned that if given a “do-over,” well over 50% would choose a different career path. It’s not hard then, to understand why so many – even those who’d achieved great success – would ask themselves: “Do I really want to spend the next twenty, thirty or more years of my life doing a job I’m not all that crazy about?”

Finally, a significant factor which has not garnered much attention concerns our most primal instinct – to be safe. Simply put, home has come to represent safety and the world outside the home, danger.

What Role Does Personality Type Play?

Although few decision-makers understand or appreciate it, Type may play the greatest role in determining how eager or resistant employees are to return to the workplace.

I believe that two aspects of Type have the greatest weight: whether people are an Introvert or an Extravert, and whether they are a Thinker or Feeler. Why this particular combination of type preferences?

Type aficionados already understand the meaning of these terms. But for those newer to the world of Personality Type, here’s a brief explanation:

The terms “Extravert” and “Introvert,” and their meaning, are probably what Carl Jung is best known for. While extraversion and introversion have many characteristics, at their root is the rather amorphous notion of “energy.”

Typically, Extraverts are energized by being around people. While energy itself is invisible to the naked eye, one can almost see Extraverts come alive when in the company of others. It’s what charges up their batteries. Of course, the converse is also true: isolation depletes Extraverts’ energy – especially if it’s for extended periods of time.

With Introverts, it’s just the opposite: typically, Introverts are energized by being alone, and their energy is depleted when forced to spend too much time with others. Continuing with the battery analogy, excessive social interaction drains Introverts’ batteries.

In Jungian terms, “Thinking” and “Feeling” are the two different ways people primarily come to conclusions or make decisions. Although these are both rational processes, this “dimension” of type most often plays out in the way people relate to one another. Thinkers make most of their decisions based primarily on logic, where Feelers make most of theirs based upon how others may feel or be affected. As a result, Feelers get nourished by relating to and helping others. But, since feelings and emotions are not the natural domain of Thinkers, they often find navigating the tricky waters of personal relationships challenging and stressful.

In terms of social interactions, this makes Thinkers more, and Feelers less, independent.

So, everyone is either an Extravert or an Introvert and either a Thinker or a Feeler. While these are all separate, discreet type preferences, what makes the Jung/Myers model so powerful is the way these four different preferences interact with one another.

Types Most and Least Eager to Return to the Workplace 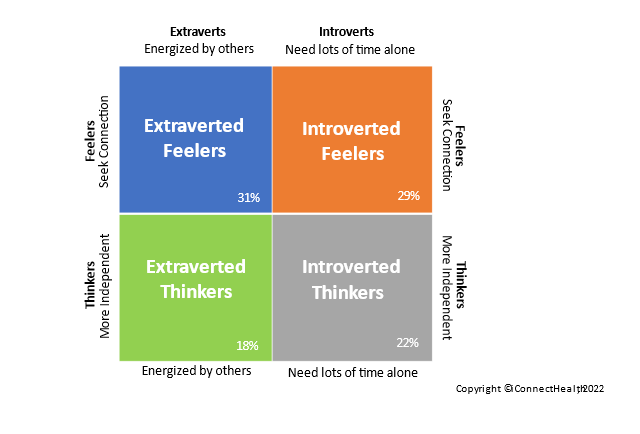 I suspect that E-Fs will be most eager to return to the workplace. Consider Karen, a single ENFP Millennial in her mid-thirties who lives in Brooklyn. Outgoing and friendly with a huge social network, the pandemic has been particularly cruel to Karen and others like her. Although she’s been able to at least see peoples’ faces on countless Zoom calls, the interactions are all two, rather than three dimensional. There is no actual human energy being shared.

I’d bet cash money that I-Ts will be least eager to leave their home offices. By their nature – and that’s what personality type is – most ITs are extremely independent and really enjoy their own company. Aaron – an INTP fortyish project manager living in the Midwest – feels like he’s done some of his best work over the past two years. And with few of the ubiquitous interruptions he experienced at his workplace pre-pandemic, he’s certain that he’s been more productive.

I-Fs are likely to have some ambivalence about returning to work after being homebound for so long. With Rachel’s two young-adult children living on their own and sharing an apartment, Rachel – an ISFJ – misses the few colleagues whom she considered friends and has worked with for years. However, like Aaron (the INTP), she’s really enjoyed the peace and quiet of not having people drop by her office unannounced, and being able to devote so much focused time on her projects.

An ENTJ, Brandon also has mixed feelings about going back to work. He clearly misses the energy, pace, action and camaraderie of his colleagues. But, as a manager (like many ENTJs), he doesn’t miss the drama or having to deal with peoples’ emotions.

Of the four E-T types, ESTPs and ENTPs are the most outgoing and social. And, because they are Thinkers who tend to not take most things personally, they’re likely to be more eager to return than their ESTJ and ENTJ “type-mates.”

Where do you fit in? If you know your type, it will be interesting to see how much you resonate with the examples offered above. And hopefully, this article will give you some new insights into the factors that will influence your feelings about returning to the workplace. Good luck!

Paul D. Tieger is the Founder and CEO of SpeedReading People, LLC. He is an internationally recognized expert on – and author of five breakthrough books about – personality type including The Art of SpeedReading People and the one-million copy best-seller Do What You Are.
A jury consultant for twenty-five years, Paul pioneered the use of Personality Type to help trial attorneys understand and communicate with jurors and has worked on dozens of high profile civil and criminal cases including the first physician-assisted suicide trial of Dr. Jack Kevorkian. Paul holds a BS degree in Psychology and an MS in Organizational Behavior.

Are you a #TypeB personality? Here are 6 signs to look for: t.co/M99SuYuJqr t.co/iY55OYxYKN
Looking for some Introvert-friendly fun in the sun? We put together the ultimate summer bucket list for #Introverts… t.co/oVwKh8FIsW
Got #ImposterSyndrome? Here are 9 tips to help you deal with it: t.co/6XPpqTmIdx t.co/BJ6LbEjnLN
Are you an #Enneagram 4? Here are 7 career struggles that will sound all too familiar: t.co/sJI9ybXKQ4 t.co/nmJZbkRxXL
Management is a tough job, which is why it's important to know your leadership style: t.co/rdisdGS42g t.co/n6vthzLW2e